Every individual life matters to the Uganda Police Force

I read with profound shock the Daily Monitor story titled “Police is mandated to protect all citizens, including Journalists” published on January 30. Does the writer seriously believe that this is news to me?

Let me make it clear that the number one priority of the Uganda Police Force is to protect and serve all. Our role is to secure life and property in partnership with the public in a committed, professional manner in order to promote peace and development and guarantee the human and constitutional rights of all.

I would like to reiterate that we treat all people equally, citizens and journalists alike because at the end of the day, all are equal. At no point has any police officer ever been instructed to shoot at or manhandle members of the public, including journalists. Anyone who goes against the standard rules of engagement and takes the law into their own hands will face the full wrath of the law.

To this end, through various media, there have been allegations of Police harassment of journalists during public rallies and other events. Last week, I launched an investigation into allegations of a shot fired by police at Kalerwe, Kampala on Tuesday, January 24. This was in relation to, you may remember, the recent claims of Daily Monitor staffer Isaac Kasamani, who alleges that he was shot [at] by one of my police officers whilst covering the walk –to- work rallies.

At the press conference on Saturday January 28, I personally asked him to come forward and make a formal personal witness statement with police. On top of my call, the Minister of State for Internal Affairs, James Baba, implored this gentleman to come forward and pursue justice.

I appointed the Police Professional Standards Unit (PPSU) to act as an investigative body. I am in constant contact with the PPSU in relation to this investigation and I have instructed them to immediately report back to me when any advances are made in this case.
Share This Story
8Share

* The Kyankwanzi politics of ‘sedation’ is killing this nation

Let me reiterate that any threats or unprofessional acts of any police officer cannot go unpunished once reported, investigated and found to be true. However, these acts must be reported. I have several times in the past arrested and instructed the arrest of police officers who have broken the law. Several police officers to date are serving prison sentences after being found guilty in a court of law by their peers.

No one in the Uganda Police Force is above the law. I ordered the fresh arrest and re-trial of former Mukono District Police Commander James Aurien, who murdered his wife and is now serving a life sentence in Luzira. Also, the police constable Alfred Achikane who shot at our local artiste Bebe Cool has been given nine years in Luzira. These and more demonstrate that we do not segregate or promote indiscipline among police officers.

Mr Kasamani spoke at the press briefing on Saturday and gave public and personal assurances to both myself and Minister Baba in front of a crowded room of domestic and international journalists at the Uganda Media Centre, that on Tuesday he would present himself to make a formal witness statement so we have the basis for a comprehensive investigation.

Obviously he is not frightened of making contact with the police or making a statement, if he was, he would not have given such public assurances. He failed to do so as agreed.

If I were in the same position as Mr Kasamani and believed that an attempt was made on my life, I would not wait more than a week to report an issue of such magnitude to the authorities. While the investigation is continuing, there is no corroborative evidence to support Mr Kasamani’s claims. In the absence of his statement police have little to investigate.
Lt. Gen. Kale Kayihura is the Inspector General of Police.

Mr Kasamani was reluctant to present himself to the same body whose officers had allegedly shot at him. It is not true that he defied summons. We look forward to an independent and thorough investigations and will cooperate fully.
Posted by Vincent Nuwagaba at 10:24 PM No comments:

M2G is a Think Tank cum Pressure Group born out of the realization that Uganda in the 2nd Millennium has cross-cutting generational challenges and /or problems. It has been started by the University Graduates churned out in the current millennium together with other selfless civil society activists and it believes that the M2G graduates of universities and other tertiary institutions must play a leading role in providing solutions to our national cross-cutting problems.
Our society is beset by ills such as graduate unemployment, excruciating poverty alongside massive wealth in a few hands, disease, seemingly incurable corruption, sectarianism, favouritism, greed, commercialization or monetization of politics, inter alia. These ills have resulted into mediocrity even in the most sensitive public offices. These and many others are the issues that M2G sets out to address.
M2G is different from political parties in a sense that its primary aim is not to capture state power. However, M2G doesn’t discourage its members from seeking political leadership positions and believes in offering political solutions to the socio-economic malaise since it is largely caused by politicians either by commission or omission. Accordingly, we shall reign in politicians to stop committing errors of commission or omission that result into excruciating misery to the masses. We envision a society where the masses will not pay for their leaders’ sins.
M2G is different from NGOs in a sense that a number of NGOs agenda tends to be donor-driven and some NGO employees are motivated by a pay cheque not necessarily addressing citizens’ socio-economic challenges but also many NGOs wait for donors to set a pace for them hence being accused that their agenda is donor-driven.
As M2G, we shall emphasize social justice and not charity and this we shall ably do it through civic education premised on our activities that include research, monitoring and documentation; debates seminars and workshops; radio and television talk shows and leadership grooming and training. We don’t intend to seek for donor funds to build hospitals and schools and equip them. Rather we urge the government that collects revenue from taxpayers to build hospitals, schools, stock them with drugs and scholastic materials and ensure access to education at all levels on the basis of merit regardless of one’s socio-economic status. We shall seek funds from donors, members, friends and well-wishers to ensure that we turn our problems into projects.
M2G shall however work together with government, political parties and all other civil society organisations through networking and partnerships to churn out a shared national agenda.
Ours is a purely voluntary, not monetary-driven group of selfless citizens who believe that Ugandan problems must have Ugandan solutions. We seek to build a generational social movement bigger in scope than the trade union movement and the pan African movement.
M2G Beliefs
1. We believe that justice is more important than charity, so our people need justice not charity
2. We believe that we must be solution-oriented not problem-oriented
3. We believe that as a generation we don’t have problems but projects.
Our Motto
“We must be the change we wish to see in Uganda”
Our Mission
To heal Uganda and make it a better place for all Ugandans by providing generational solutions to generational problems
Our Vision
A society in which the masses don’t pay for their leaders’ sins.
Objectives
Core Objective
To build a critical mass of human rights defenders and anti-corruption crusaders that will engender a civic competent citizenry capable of holding their leaders to account
Specific Objectives
i. To sensitize the masses about their rights, responsibilities and state duties through civic education, workshops , seminars and debates
ii. To wage a protracted people’s battle against corruption and all forms of abuse and misuse of office in both the public sector and civil society sector.
iii. To train and groom leaders
iv. To inculcate a generation doctrine of selflessness and patriotism in the current generation
v. To build people’s capacity by empowering them with tools to assert and demand their rights
vi. To debate and critique national programmes and policies
vii. To enhance critical thought and analysis
Target Groups
1. The youth who include students, school drop outs and graduates
2. Workers
3. Women
4. Children
5. The elderly
6. PWDs
7. Traders
We shall have specific programmes for each of the above specific interest groups
Activities
a) Research, monitoring and documentation
b) Debates, seminars and workshops
c) Press conferences
d) Leadership training and grooming
e) Exchange study programmes
e) Capacity building aimed at mindset renewal and change
Membership
Open to people who share our vision, ideals and objectives subject to approval by the administrators.

Administration
The Think Tank shall have a President/ Chairman, Secretary General or Executive Director and other members occupying positions responsible for the day-to-day running of the Think Tank. 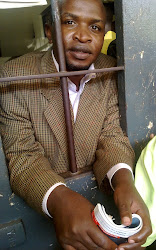